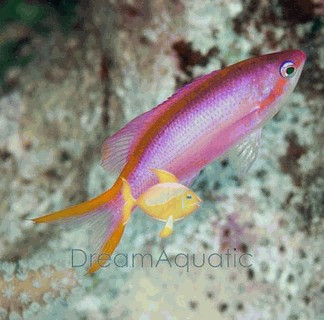 Ventralis Anthias - Pseudanthias ventralis Ventralis Anthias, is commonly found in the Pacific Ocean. Anthias are also commonly called Fairy Basslets in some parts of the country. Their gorgeous flowing fins no doubt inspired the Fairy reference and the Basslet portion of the name recognizes that they are the little cousins of Sea Basses and Groupers. Because of their small size, they do not pose a threat to other fish and make wonderful reef inhabitants. A typical meal for an Anthias is comprised of zooplankton and small animals such as Brine Shrimp and copepods. In the wild, Anthias form large schooling groups on the reefs. A single male will claim part of the reef as his and fight off other males that try to invade. The other Anthias present are juveniles and females, which the male keeps a watchful eye on. For aquariums, the females should be introduced first and a male at a later date. One of the more difficult Anthias varieties to keep, the Ventralis Anthias, also known as the Longfin Anthias does well when kept alone and requires a 30 gallon tank. Males tend to fight and may harass females unless the tank is large - 50 gallons. The male's body is purple to reddish pink, with yellow fins and yellow markings on the face. The female is a dark orange-brown. The Ventralis Anthias does best in low-to-moderate indirect lighting on a diet of zooplankton and floating filamentous algae. Maximum Size: The Ventralis Anthias grows up to 3 inches. General Size Specifications: 1-1/4" to 2-3/4" Minimum Tank Size Suggested: The Ventralis Anthias prefers a tank of over 50 gallons Water Conditions:
Keep water quality 72-78ÁF; sg 1.020-1.025; pH 8.1-8.4; dKH 8-12 Natural Environment: Inhabit reef faces and slopes/drop-off areas Habitat:
Ventralis Anthias are found near Western and Southern Pacific Ocean: mainly from the Cook Islands. Feeding and Diet:
Planktivore. Feeds on zooplankton in the wild but will adapt to frozen and live preparations. Live foods may have to be offered at first. Food supplements are well worth the effort. Will accept dry-prepared foods but cannot be sustained on them or brine shrimp alone. Breeding:
Ventralis Anthias species all share the trait of being hermaphroditic. If a dominant male perishes, the largest female of the group will often morph to take its place.