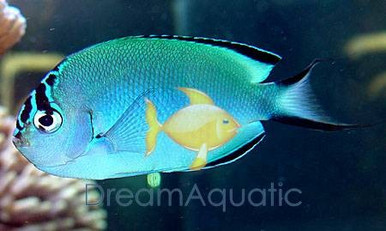 Watanabei Angelfish - Genicanthus watanabei: The Watanabe's Angelfish, also known as Watanabe's Lyretail Angelfish, is one of the few angelfish displaying sexual dimorphism. It is also known as the Blackedged Angel because of the black ridge on outer edges of the dorsal and anal fins. Males also display 8 thin, black, horizontal stripes on the mid and lower portions of its silvery-blue body. Females do not display stripes but are equally striking. They are uniquely marked with a deep black bar adjoining the eyes. The sharply raked tail fin of both genders is accented by a black band along the upper and lower edges. Growing to seven inches in the wild, it can be kept in singles, pairs, or ñharemsî of a single male and multiple females. Tolerant of other Angels, the Watanabei should be introduced before any other members of the Angelfish family that may choose not to tolerate it. Its natural diet includes algae and organisms naturally growing on Live Rock. Carnivorous and herbivorous preparations should be fed intermittently to ensure the best nutritive diversity. Neither Soft nor Hard Corals (including Stony Corals) are likely to be harmed a Watanabei. This active swimmer requires feedings multiple-times daily for best health. The Watanabe's Angel requires a 100 gallon or larger tank, and is an ideal candidate for the deep-water reef aquarium. Acclimation will be facilitated by a dimly-lit tank. The tank should have multiple hiding places and live rock for grazing. Water Conditions: Keep water quality high (SG 1.020 - 1.025, pH 8.1 - 8.4, Temp. 72 - 78Á F). The Watanabe's Angelfish groups Up to 6 inches in size. Dwarf Watanabe's Angelfish Are generally available at 2-3 inches. Habitat: The Watanabe's Angelfish is usually found near Western, South Pacific Specific Care Information: Watanabe's Angelfish are best housed as a male-female pair. Do not keep two males in the same tank as fighting will ensue. Watanabe's Angelfish seem very susceptible to swimbladder damage. Diet: A varied diet of meaty foods such as vitamin-enriched brine shrimp and finely-chopped crustacean flesh, Spirulina, marine algae, high-quality angelfish preparations, mysid or frozen shrimp, and other meaty items will provide good nutrition. Sexual Differences: The Watanabe's Angelfish are hermaphroditic and difficult to breed.