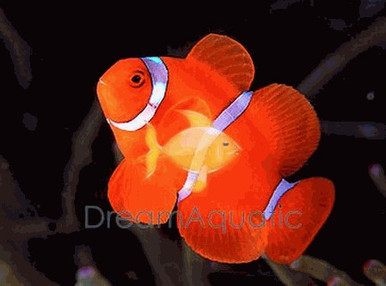 White Stripe Maroon Clown Fish - Premnas biaculeatus The Maroon Clownfish, also known as the Spine-Cheeked Anemonefish or Maroon Anemonefish, has a bold, red body color with a broad white stripe on the forehead, and white stripes on its midsection and in front of the anal fin. The Yellowstripe Maroon Clownfish is similar to the Maroon Clownfish except it has yellow stripes on the forehead, midsection, and tail, instead of white. They are strikingly beautiful, with the trademark spine on their cheeks. As juveniles, the Yellowstripe Maroon Clowns will have white stripes that will gradually turn yellow as they mature. All the other 26 known Clownfish species belong to the genus Amphiprion, but the Maroon Clownfish belongs to the genus Premnas. Both Amphiprion and Premnas are included in the family Pomacentridae, a family that also includes the Damselfish species. A 30 gallon or larger aquarium is desirable for the Maroon Clownfish as is a host anemone such as the Bubble Tip Anemone (Entacmaea quadricolor). It is aggressive towards other clownfish. Tank raised clownfish are very hardy and durable fish making them a perfect addition for the novice or seasoned aquarist. If introduced to the aquarium at the same time, many varieties of tank raised clowns can be maintained together in the aquarium. Do not move the Maroon Clownfish with a net as its cheekspines will become entangled. Use a specimen container if capture is necessary. The Maroon Clownfish likes frozen shrimp and herbivore preparations. Because of its spines, this clownfish should not be caught using a net in case the spines get entangled. The stripes across the body are normally white, but can also be golden. The female is usually larger than the male, and the male is usually a deeper color red, although this is not true for every set of maroon clowns. The Maroon Clownfish is a popular aquarium species and it is not very difficult to keep if you known how to keep a basic saltwater aquarium. It is a very beautiful fish and will look stunning in any aquarium set up. The entire body is maroon red and decorated with three very distinct white stripes; one on the forehead, one on the midsection and one just in front of the anal fin. The Maroon Clownfish can be aggressive, especially towards other Clownfish regardless of species. Housing it with other Clownfish is therefore unadvisable unless you have a very large and well decorated aquarium. A male and a female can however do well together if they are compatible. The Maroon Clownfish will usually only display severe aggressive behavior toward non-clownfish species if a fish tries to venture into the territory claimed by the Maroon Clownfish. Since the Maroon Clownfish is a predator, it should naturally not be kept with fish that is small enough to be considered pray. Social Behaviors:
The Maroon Clownfish is generally easy to keep. Habitat:
The Maroon Clownfish, is a type of clownfish that are found in the eastern Indian Ocean, from Malaysia to Queensland. Maximum Size:
They can grow up to be about 16 centimeters (6. 3 inches), and as they grow, they get more aggressive to other clownfish. They are also known as the Spine-Cheeked Clownfish, or the Maroon Anemonefish. Minimum Tank Size:
They are suggested to have a 30-gallon tank. It normally likes to have a host anemone such as the Bubble Tip Anemone. Feeding and Diet:
The Maroon Clownfish diet consists of meaty items such as frozen shrimp and herbivore preparations. They feed all kinds of live, frozen, and flake foods. Best to feed small amounts several times a day. In a reef situation they don't really need to be fed very often at all.