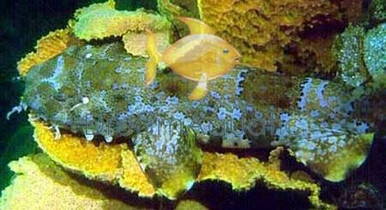 Wobbygong Shark - Orectobobus species - Japanese Wobbegong The Wobbygong Shark is also known as the Wobby, Wobbegong, Wobbygone Shark. It is a bottom dwelling shark that has a very flattened appearance to the body and "frills" around the mouth. The body is very mottled, allowing it to easily camouflage itself. The spotted wobbegong shark, Orectolobus maculatus, aka wobbegong, reaches a maximum length of 3.2 m, and the average size of an adult male is between 1.5-1.8 m. They are yellow-green or brown in color with saddle- and O-shaped markings. The body and head of the wobbegong are flat in shape, and the mouth has a protruding jaw that aids in the capture of prey. The spotted wobbegong, like other wobbegong species, has nasal barbels and hanging tassels on and around the head and body. There are 2 dorsal fins, the first originating over the pelvis, the second just before the anal fin. The caudal fin is short and the pectoral and pelvic fins are broad. Other species of wobbegong are similar in appearance, however, the patterns of the spotted wobbegong are specific to this species and aid in camouflage among the reefs. Wobbygong Shark collected from Australia, the Wobbygong readily adjusts to aquarium confines. A bottom dwelling species, they can do well under the care of the experienced shark keeper. Feeds on bottom dwelling invertebrates. Offer meaty foods including pieces of fresh shrimp, scallop, mysis shrimp, or marine fish flesh. Like most sharks, it may fast for weeks before it begins feeding. When first introduced into the aquarium, small pieces of cleaned squid or live saltwater feeder shrimp should be used to entice this fish to eat. Then it may be fed shrimp, scallops or pieces of fresh marine fish. The Wobbygong Shark should only be kept by expert aquarists. Maximum Size:
This species is about 20cm in length when born and reaches a maximum size of about 3m. Appoximate Purchase Size: Small 8" to 10", Medium 10" to 18", Large 18" to 26" Habitat:
Wobbygong Shark live in shallow coastal waters down to about 100m. They often lie on sand or rocky reef bottoms and are frequently seen by divers. Feeding and Diet:
Wobbygong Shark is a carnivore. Feeding occurs mainly at night and includes large prey such as fishes, crayfish, crabs and octopuses.