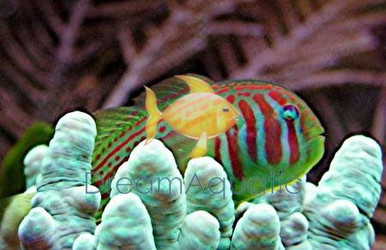 Yellow Clown Goby - Gobiodon okinawae The Yellow Clown Goby, also sometimes referred to as the Citrin or Clown Goby, is a small yellow fish with blue vertical lines around the eyes and gills, and a blue horizontal line along the dorsal fin. Yellow Clown Goby fish is full of personality. They make great nano fish. They are the largest of the clown gobies. The only problem with this fish and other species in its genus, is that they can be hard to get feeding. Yellow Clown Goby in general come into the trade malnourished, and can sometimes die within a month. That is the only reason that makes them difficult. The Yellow Clown Goby typically don't do well in large tanks, because its hard to get to them, or they get lost. The Yellow Clown Goby will spawn while in the aquarium, laying eggs that sink into the coral branches where they are protected, however, the young have rarely been reared successfully. The Yellow Clown Goby is a carnivore and likes to eat brine & mysid shrimp and other meaty treats. The Yellow Clown Goby is a low maintenance fish and may act peacefully toward other fish. Maximum Size:
The Yellow Clown Goby grows up to 2 inches. Tank Conditions:
The Black Cap Jawfish should reside in a 30 gallon or larger aquarium with a tight-fitting lid to prevent it from jumping out, and at least 3 inches of mixed substrate for burrowing. It poses a possible threat to small shrimp. The Yellow Clown Goby require high quality water with temperature varying between 72 and 78 degree Fahrenheit. The specific gravity should be kept between 1.020 and 1.025 points and the pH value should remain between 8.1 and 8.4 points. Habitat:
The Yellow Clown Gobies are found throughout the Indo-Pacific, and some species extend to the Red Sea and to the western Pacific Ocean. They are abundant in these waters, and range from depths of 5 feet to as deep as 60 feet. Their depth distribution is directly dependant upon available corals within which they can find shelter. Feeding and Diet:
The diet of the Yellow Goby should consist of a variety of brine shrimp, frozen mysid shrimp, and table shrimp. Once acclimated, some will accept frozen food preparations for carnivores. If housed in a reef tank, it needs to be fed once a day. If housed in a tank without substrate, it will require several feedings per day.