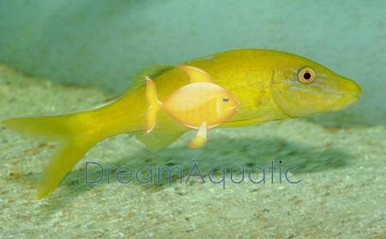 Yellow Goatfish - Parupeneus cyclostomus The Yellow Goatfish or Goldsaddle Goatfish has two different colour phases. The fish in the image shows the dark phase with blue markings on the scales and a yellow spot behind the second dorsal fin. In the second colour phase the entire fish is yellow. The Yellow Goatfish is a solid golden-yellow colored Goatfish from head to tail. The young Yellow Goatfish may sift the sandy bottom of the tank in search of invertebrates to eat. The older Yellow Goatfish is prone to eat small crustaceans, fish, and worms. The Yellow Goatfish has total of 8 dorsal spines, a total of 9 dorsal soft rays, 1 anal spine and 7 anal soft rays. The Pectoral rays are16 (rarely 15 or 17). Gill rakers count to be 29 to33. The body is depth 3.25-3.8 in SL, the head length (HL) is 2.85-3.1 in SL, long snout small eye, barbels very long, the longest dorsal spine 1.5-1.7 in HL, the penultimate dorsal ray is 1.1-1.2 in length of last dorsal ray; pectoral-fin length is 1.5-1.7 in HL; pelvic-fin length is 1.35-1.55 in HL. The color of large Yellow Goatfish adults is yellowish gray, the edges of the scales are bright blue except ventrally. Their is a large, hemispherical, saddle-like, yellow spot covering most of upper half of caudal peduncle, region around eye yellow have radiating short narrow blue bands; caudal fin with longitudinal blue bands, second dorsal and anal fins with narrow oblique blue bands; a second smaller color phase entirely yellow, the dorsal peduncular spot sometimes apparent by being brighter yellow than rest of body. The Yellow Goatfish species can come in several different color forms, but the one most common in the aquarium trade is bright yellow overall. There is also a light brown form and a purple color form, both of which have a yellow saddle near the base of the tail. This is a nervous fish that should be provided with plenty of swimming space, several good hiding places and nonaggressive tankmates. It will often follow unrelated fish tankmates. Size:
The Yellow Goatfish grows up to 20 inches .The small size will come to you generally 2 to 3 inches; the medium generally 4 to 5 inches; the large generally 6 to 7 inches. Tank Conditions:
The quality of water should be maintained in order for the Yellow goatfish to survive. The specific water requirements are specific gravity of 1.020 or more but less than 1.025. The temperature should be between 72 and 78 degree Fahrenheit and pH not less than 8.1 and also not more than 8.4. Habitat:
The Yellow Goatfish is distributed in the water of Indian and Pacific Ocean from Red Sea to Durban, South Africa) and east to the Hawaiian, Line, Marquesan, and Tuamoto islands, north to the Ryukyu Islands, south to New Caledonia and Rapa. Feeding and Diet:
The diet should consist of a variety of meaty items fed at least four times daily. Up to 70% of the diet of the Yellow Goatfish is made up of fishes.