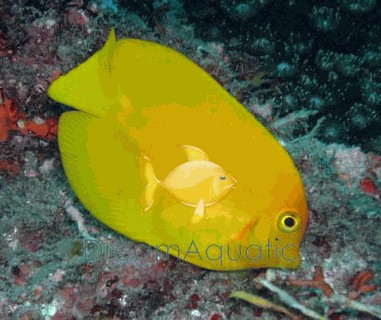 Yellow Mimic Tang - Mimic Lemon Peel Tang The Yellow Mimic Tang is commonly known as Chocolate surgeonfish, Chocolate Yellow Mimic Tang and Mimic Surgeon. When young, they have bright yellow colored circular body and as they grow the bright sulphur color fades. Large varieties of this fish, though rarely available, are dark brown with golden trim. There is not only change in the color of the Yellow Mimic Tang fish but also their fins appear to have dark blue or black colour. Some feel that a brilliant juvenile yellow fish looks attractive in an aquarium when compared to its dark matured color. However, these fish have a silky like fin which is a distinguishing feature, when compared to other members of tang family that usually have stiff fins. Young members of the tang family try to ape or mimic pygmy angelfish such as Centropyge eiblii, C. flavissimus, or C. vroliki and hence they get their name Yellow Mimic Tang .This camouflaging technique is mainly done to protect themselves against predators. As they mature The Yellow Mimic Tang fish use their spines on the tail as their defense mechanism. Unlike other members of the tang family which swims about in groups this Yellow Mimic Tang is a "rare loner" commonly observed in deep lagoons. This easy to maintain hardy fish is a priced procession in any aquarium. This is perfectly reef aquarium compatible. Generally Yellow Mimic Tang are peace loving. Younger members of this group can be kept together, but the bigger ones become more aggressive. So itÍs always preferred to house a single member in the tank. If at all more than one fish is introduced itÍs always better to do simultaneously. This mainly helps to avoid any territorial dispute. Large tank with more space to swim and hide is desired by Yellow Mimic Tang. Daily routine of feed has to be supplemented with marine based seaweed and algae to enhance the immune system, mollify aggression and have well balanced life. Maximum Size:
The Yellow Mimic Tang is known to grow to a maximum size of 10 inches. . General Size Specifications:
Small sized Yellow Mimic Tang fish generally comes in 1.5 to 2 inches, medium ones in the range of 2 to 3 inches and larger variety 3 to 4 inches. Minimum Tank Size:
100 gallons with plenty of places to hide & swim. Keep water quality high (SG 1.020 - 1.025, pH 8.1 - 8.4, Temp. 72 - 78Á F). Habitat:
Range: Indo-Pacific: Seychelles to the Marquesan and Tuamotu islands, north to southern Japan, south to the Great Barrier Reef and New Caledonia; throughout Micronesia. Feeding and Diet:
The Acanthurus pyroferus is a herbivore and likes to eat Dried Seaweed (best), marine algae, mysid shrimp, Spirulina, Romaine Lettuce (blanched), fresh seaweed and other meaty treats.