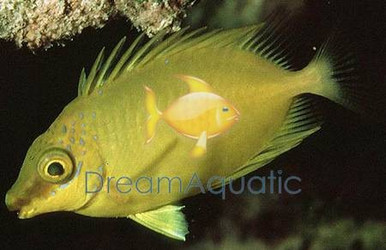 Yellow Foxface Rabbitfish - Siganus Corallinus The Yellow foxface Rabbitfish, also known as the Blue Spotted Spinefoot, is a fish that usually travels in pairs among the reefs of the Indo-West Pacific. It has an oblong body, which is yellow, and a beautiful series of blue spots that cover the entire body. The Yellow foxface Rabbitfish requires a 100 gallon or larger aquarium. It is a very peaceful species except when housed with other rabbitfish. The Yellow foxface Rabbitfish may be housed with more aggressive fish and can be kept in pairs. Its predators will tend to leave it alone because of its venomous dorsal spines, which it can raise when disturbed. Care must be taken when handling this fish to avoid the possibility of being stung by its venomous spines. Yellow foxface Rabbitfish are generally reef-safe if they are well fed. If not, it is possible for them to nip at and consume some species of LPS and soft corals. Maximum Size:
The Yellow Foxface rabbitfish grows up to 10 inches. General Size Specifications:
The small size will come to you generally 2 to 3 inches; the medium generally 4 to 5 inches; the large generally 6 to 7 inches. Minimum Tank Size:
The Yellow Foxface rabbitfish prefers a tank of at least 100 gallons with plenty of places to hide & swim. Water Conditions: Keep water quality high (SG 1.020 - 1.025, pH 8.1 - 8.4, Temp. 72 - 78Á F). Habitat:
Range: Hawaii, Tahiti. And region of western Pacific Ocean. Feeding and Diet:
The Yellow foxface rabbitfish foods for herbivores as well as dried algae sheets. And vegetables may be required to induce feeding.