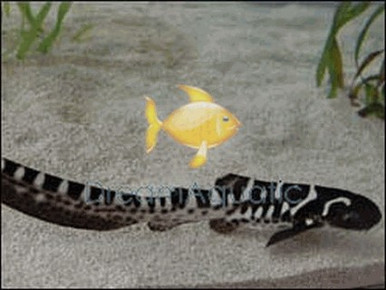 Zebra Shark - Stegostoma varium - Zebra Shark Juvenile Long and sleek, zebra sharks can wriggle into reef crevices and caves to hunt for their favorite food. Barbels (fleshy feelers) on their snouts help them search for their prey. Zebra sharks hunt at night; in the daytime they usually rest quietly on the bottom, ñstandingî on their pectoral (side) fins. That long tail is unusual for a shark. Juveniles are dark brown with white zebralike stripes, but adults are tan with brown leopardlike spots, so this shark has at least three common names zebra shark, leopard shark and zebra/leopard shark. ItÍs sometimes mistaken for the Eastern Pacific species. Common names can be confusing, which is why we depend on scientific names for identifying animals and plants. To reproduce, male sharks use claspers (modifications of the pelvic fins) to transfer sperm into the femaleÍs reproductive tract. The zebra female lays fertilized eggs in tough capsules covered with tufts of filaments, which attach the eggs to the seafloor. Maximum Size:
The Zebra Shark grow to a maximum length of 28.4 inches, and mature at approximately 24.0 inches. General Size:
This fish is generally available from 6 to 14 inches. Minimum Tank Size:
The Zebra Shark prefers a tank of at least 100 gallons with plenty of places to hide & swim. Tank Conditions:
The Zebra Shark should ideally be kept in temperatures between 72 and 78 degrees Fahrenheit. A pH value of 8.1 or 8.4, and a specific gravity of 1.020 to 1.025 should be maintained. When kept with invertebrates, the specific gravity range should be 1.020 to 1.025, for the invertebrate species. In a fish only aquarium, the specific gravity should fall between 1.020 and 1.023. Habitat:
The Zebra Shark is found in tropical Western Pacific and Indian oceans, usually found near coral reefs. Diet and Feeding:
Offer live grass shrimp to initiate a feeding response. Some individuals may accept meaty seafood such as shrimp, scallops or marine fish flesh.